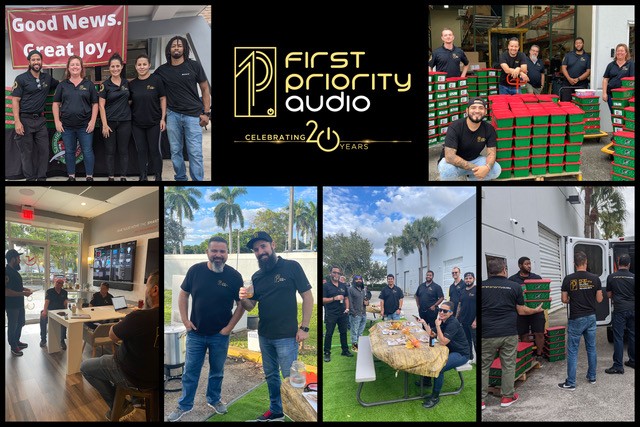 This November, we’re celebrating 20 years of business here in Fort Lauderdale, FL. 20 years! So much has changed in the world of audio, video, and smart home automation, and we’re taking this time to reflect on how far we’ve come.

To celebrate, we sat down with five team members to ask them about their experience at First Priority Audio. Everyone had their own unique responses—besides question three. All were in agreement for that answer!

SEE ALSO: All in the Details: Project Spotlight on a Florida Home Theater Installation

What is your role, and how long have you been employed at First Priority Audio?

Steven: Well, I was with First Priority Audio for five years, then I went to start my own company…But I came back, and I don’t plan on leaving again! I’m a level-two technician working on a senior technician position because of new stuff they picked up while I was gone. I’ve been here for ten of my twenty years in the industry.

Manny: I’ve been with First Priority for just over a year now, and I’m a service tech.

Mark Russel: I am a project coordinator, and I’ve been working for First Priority since February 2020.

Joe: I’m a technology consultant, which entails meeting with prospects, understanding their needs, and providing the solution in home technology. And I’ve been doing this here for four months.

Gunnar: My role here is a system designer, and I’ve been with First Priority for six years.

How’d you get started in the automation industry? Why are you still here?

Steven: Technology’s been a passion of mine for forever. I can remember when I was twelve years old, I bought a cordless phone and took it apart. I bought a pager and an LED and three-way switch… In the many years of doing this stuff, I’ve had many good mentors that kept a drive alive in me.

Manny: I’ve been doing it since I was back in high school. Not so much automation, but electronics, and it just kind of grew into working in the industry full-time. I’ve always liked electronics and helping people use them.

Mark: It’s really the only job I’ve ever had. Growing up, my dad had an audio-video store, so it’s my livelihood, and I just love it.

Joe: I’ve been in technology and automation for thirty years but more in office technology. And now I’m more involved in home technology. So, automation and technology have been pretty much everything I’ve ever done. But there is a difference between corporate and home. It’s a fun change.

Gunnar: Funny thing, I’m a musician and was in the music industry for about twelve years, so I got very exposed to the audio side. I did many studio sessions and helped calibrate studios. While in New York, I got exposed to commercial networking and engineering and things like that. So, mixing the network background with audio, I ended up setting up a pro-basketball player’s computer one day. And I realized I had the knowledge for this and got into the AV world.

Steven: You’re definitely asking the right person. I’ve probably worked for twenty automation companies. I grew up in California, and now I’m in Florida…this is a company with a really strong family feel and ground roots here in Florida. Everybody here plays nicely together and works as a team. Because of our efforts, we gain more and more people, and it’s a snowball effect from the pride we have here.

Manny: The atmosphere and camaraderie here are really good. This is the first place I’ve worked at that I have a four-day workweek, so I get a lot of time to myself. I have worked for other integrators, but the atmosphere and communication are better here than at previous jobs.

Mark: The sense of family and the respect we have for each team member. I couldn’t be with a better organization. It’s awesome.

Joe: Well, other than my own company, I think this is the only company I’ve found with the family atmosphere.

Gunnar: If I had to boil it down to one thing, it is the family and honest environment here. There’s a lot of companies out there that are financially successful. But if you go to work and you feel like you never left home, that’s how I feel when I come to work here. I feel like this is my house; I feel very comfortable. And this makes me more productive. I don’t have to worry about who’s watching my back.

What’s your favorite part about working at First Priority?

Steven: I can’t specify; I’ve had so many roles here. But I like that our industry is an ever-evolving situation. There’s always something new coming out. I’ve had some really special projects showcased in magazines before, and that feels good. But you know, it’s a team effort. I couldn’t have done it by myself.

Manny: The communication with fellow employees and getting information before I have to go to a job. It’s not hard to reach out to someone and ask questions and get an answer. The fact that we actually have meetings and share with each other is very helpful, because you always run into something new that could be challenging or different.

Mark: Getting a client’s house commissioned and the twinkle in their eye when we fire it up and they hear a specific song come on. It’s just satisfying.

What’s one of your favorite projects you’ve ever worked on?

Steven: One would be a home on the Intercoastal here in South Florida. It had a lot of technology that was fresh and new at the time—the way TV mounts would swing out of walls and fancy stuff. I was a lead on that project, and it was one of my first bigger projects.

Manny: Usually the ones on Marina Mile. You have a pretty good view when you’re there and nice audio systems in the back where you can stare at the ocean.

Mark: When I lived in Colorado prior to moving to Florida, I did many sports stars’ homes. They were pretty awesome. And I like doing the everyday homes too because people think they have to spend a ton of money to get a really good smart home, but you don’t.

Joe: All my projects excite me. But there was an investor that purchases homes, and each year for five years, he puts in a major technology investment. And at the end of the five years, he sells it as a full smart home real estate opportunity. So that project gave me, I think, the widest spread of technologies going into one house that I’ve ever worked on. We put in a full theater, a network, security system, custom control lighting, full distributed audio, motorized shades, and high-end OLED televisions.

Gunnar: Good question—and tricky question too. We got a particular job—actually it’s one that we’re submitting to the CEDIA award this year. It was great. You got to see something that was planned for ‘okay’ and developed into something great. It began as a simple audio distribution and shade automation project, and it became this fully loaded everything-automated home.

What are some of the big milestones you’ve seen in the industry since you’ve started working for First Priority and in automation in general?

Steven: There used to be a time when just a programmer came in two or three days a month, maybe a week at a time, then just disappeared. Then there were audio and video guys who did the rest of the job.

Manny: One of the bigger milestones is not my favorite; it’s HDMI. It seems to cause more issues than good.

But in general, it almost seems like there’s never a milestone because the rate of growth and improvement is nonstop. It just blurs together. Video formats change and get better, and as all the products get better, the video distribution systems are almost right behind them. It doesn’t seem like there’s really a stop to say, ‘Hey, here’s a milestone here.’ It’s just ongoing and continuous. Before you’re done with 5G, you’re already at 6. You always get to see something new.

Mark: It’s kind of amazing how everything’s moving towards voice control now. Who would have thought that twenty years ago? A lot of people are stuck on Alexa and Google, and those work well, but Josh.ai is killing it with theirs. It’s like talking to a person.

Joe: Some of the cooler things I’ve seen are mirror TVs in bathrooms. I’ve seen a sixty-five-inch motorized bracket that we put into the side of the wall that doesn’t block the ocean view. There’s a lot of cool stuff; it’s a fun and exciting industry.

Looking for home automation services? Want to work with our team? Contact First Priority Audio to get started on your project today!

Traveling? Control4 Automation Lets You Keep an Eye on Home