My Room Has Floor-to-Ceiling Windows. How Do I Install a TV? 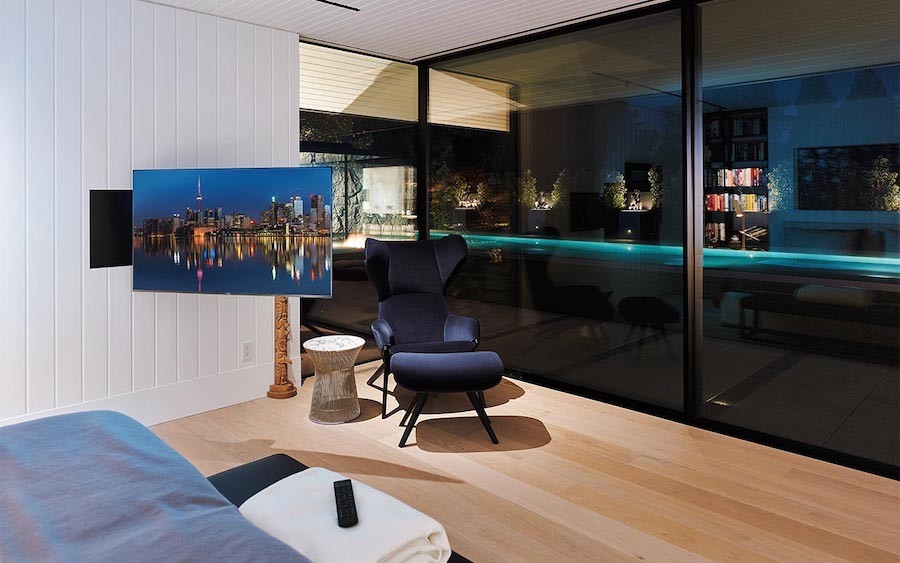 In most living spaces, it’s straightforward enough to install a TV. You’ll either mount it flush to the wall or perch it on a TV stand at an appropriate viewing angle.

But what about rooms with floor-to-ceiling windows or doors? How can you mount a television without permanently blocking the view outside?

Glass walls are beautiful, especially when there’s lush, oceanside Florida scenery like here in the Hypoluxo area. But they pose a challenge for TV and projector setups. So if you’re stumped, here’s how a professional TV installation can solve this problem.

SEE ALSO: Hidden Technology: How to Stylishly Hide Equipment Behind Your TV

Lower the TV from the Ceiling

The problem with TVs against glass walls is you don’t want to block the view. But maybe you’re okay with blocking it some of the time.

Enter the ceiling TV lift! Press a button, and it lowers your display from a concealed enclosure above. We use lifts from the manufacturer Future Automation, which offers models that gradually lower the screen from the ceiling or open it on a hinge. When movie night is over, the TV retracts back into the ceiling with no trace of it ever being there.

Prefer to use a projector system? Future Automation also offers projector and screen lifts to hide both in the ceiling.

Or Raise It from the Floor

Perhaps you have detailed ceilings that you’d rather not cut into. Or maybe the ceiling is too high. Whatever the reason, we can also install a TV lift that seamlessly raises your screen from the floor. The display glides up from the floor and turns to face your seating—without requiring furniture to mount it on!

Swivel from Under the Bed

Future Automation really thought of everything when they created the Under Bed TV Lift. If you have floor-to-ceiling windows in the bedroom but would still enjoy some TV time, we can install a lift system under the bed that retracts the display, raises it, and swivels it to your preferred viewing angle. With a press on a wall keypad, tap on your phone, or voice command, your bedroom television can appear and disappear instantly.

Slide Out from a Wall

If the room has any wall space, we can use it to install a horizontal in-wall lift. The TV is stored within the wall or cabinet, and when you’re ready, it glides out and turns to the perfect angle. So while it may block the ocean or greenery view during your show or movie, for the rest of the day, you’ll enjoy a pristine interior design.

Want to see a TV lift in action? Curious about how to bring this television magic to your home? First Priority Audio in South Florida installs custom TV setups with hidden video and audio. Contact us here to get started on your home project!

Hidden Technology: How to Stylishly Hide Equipment Behind Your TV